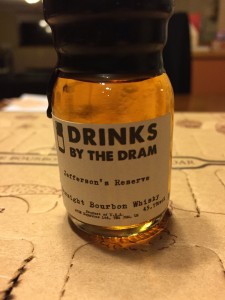 This is whisky, not whiskey. I’m sure that’s important. Once again, I am using a link to something other than the producer’s Web site because they have one of those spastic scrolling websites that make we wish I could give my browser Ritalin so it would calm down.

The bourbon itself is very nice, very smooth, a solid, well-mannered bourbon with some fire to it and a nice presence. This one’s a good sipper, and would make a great cocktail. I’d probably feel bad about mixing it, though.

I didn’t make a lot of taste notes on this one. It doesn’t have a lot of distinctive flavor to it. It’s fairly light, without being timid.

Two stars, would have been three if it had been just a bit more distinctive.